By default, when a player reaches level 51, the player unlocks the option to dedicate experience to Alternate Advancements. AAs are accessed inside Everquest using the default "v" hotkey.

AAs often have "ranks" available that allow you to progress the ability, making the effects more powerful at each rank level purchased. These values are stored in the aa_rank table. For example, Innate Run Speed has many ranks to represent the levels it can be trained.

Notice the field first_rank_id. This field allows us to then explore the AA ability to find out additional parameters:

Notice the two columns for previous and next rank id. At the first rank of Innate Run Speed, we know there are no earlier ranks, so the prev_id field reads -1. **The next rank ID is then **63, which then goes to 64, and then goes to 672. Notice that these rank IDs are not always consecutive. Obviously we can infer that Innate Run Speed has at least four ranks, since our next ID takes us to 672--if the AA stopped at the third rank, we would have instead seen a -1 value.

Note again the prev_id and next_id column values. We remember from the previous step that we left off at ID 64, and see that the next ID is 673. We see at ID 673 that we finally reach the end, indicated by the -1 value in the next_id column.

Now we know: there are five ranks of Innate Run Speed in the PEQ Database as of this writing.

The effects of each rank of an AA is stored in the aptly named aa_rank_effects database table. 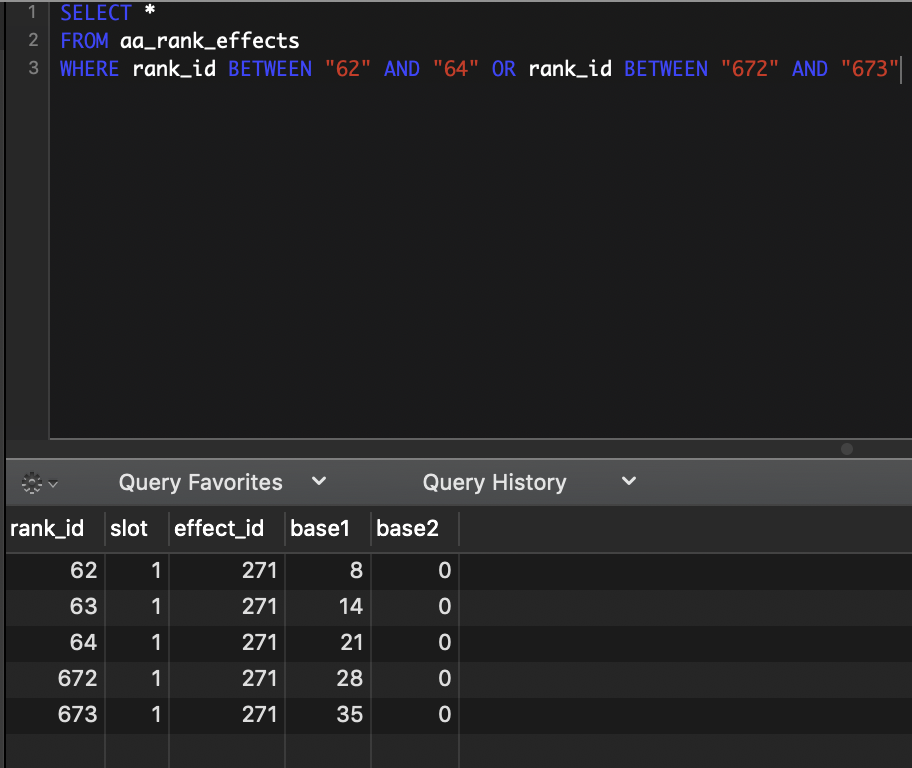 We see that at all ranks, the spell effect in use is 271, and we see that the base1 value increases at each rank.

If you haven't read up on Spells for your EQEmu Server, you might want to take a quick look at the Spells Guide before continuing.

271 is SE_BaseMovementSpeed and BV of the effect is percent. While SE 271 does not have limit or max value, it unfortunately does not stack with other movement increases. To summarize in a table, here is each rank of Innate Run Speed:

If you're thinking what I'm thinking, we could definitely take over the world by adding several more ranks to Innate Run Speed--we already know that SE 271 does not have a max!

Start by adding another AA Rank:

Using the NULL value will cause the Auto-Increment feature to work for us, and provide the next available ID for our new rank. Don't forget that we need to tell the original highest rank of Innate Run Speed (673) that it now has a new rank. How do we find out what ID auto-increment just chose? We can make use of SQL's LAST_INSERT_ID() function:

Since you may have customized your server, I will leave this value set using this function through the rest of the guide. It's important that you keep track, however, as your insert ID may change! You can now run a query to change the existing "-1" next_id value to the latest ID:

That should be it--we have created a new rank! Now let's assign our rank effect to scale up Innate Run Speed 6.

We'll want to assign the next AA Rank Effect to our new rank of Innate Run Speed.

And now we have finished adding Innate Run Speed 6, which provides a movement speed increase of 42 percent!