Every faction that exists on a server is listed in the faction_list table. This table includes a unique id, a name, and a starting (base) faction. This starting value is combined with any race/class/deity adjustments that apply (see faction_list_mod table) to create the starting faction for characters when they are born. As characters interact with the world, they can gain/lose faction through their actions, be that killing or questing. These values are continuously updated in the faction_values table.

Note that the faction_values table contains character data, even though it does not follow the Database Schema Guidelines (it should be character_faction_values).

As of 06 March 2019 we have imported the client faction list and we now use these renumbered factions. The client does not have a base for any of the factions, all of the offsets are realized in faction_list_mod instead. This does not mean that the base cannot be altered for custom results.

Each faction has a minimum and a maximum value, at which point no more faction can be lost or gained. This information is stored in the faction_base_data table. The default base maximum is 2000 and the base minimum is -2000 if there is no entry. The amount a character can earn is based on these constants and the faction's initial base value. For example, a faction that starts out at 0 (base value in faction_list) is a simple case, and would use the maximum of 2000 and minimum of -2000.

The character can earn or lose faction until his earned faction reaches the faction's min or max value. The base value for a faction impacts this in cases where that base is non zero. For example, if a faction starts out at -500, the character can earn 2500 points--500 to make up for initial impressions, and 2000 more to get into good graces. If a faction starts you out at a positive value--for instance, 300--you can only earn 1700 points, but you can lose 2300 points!

A character's unmodified faction value at any time is calculated by the following formula:

Again, note that the integer in the 'current_value' field of the faction_values table represents the factions gains and hits the player has received from killing NPCs or completing quests.

This faction value is then adjusted by any impact caused by the character's race/class/deity combination. These modifications are stored in the faction_list_mod table. These adjustments cannot be made up for by any actions or deeds: they are permanent marks on the character's record, and can therefore impact how high (or low) a character can get with the faction in question. They can be temporarily masked by things like illusions, but cannot be completely erased.

To get your final (modified) faction, add the race/class/deity modifier to the Current Unmodified Faction value:

Imagine that we create a character named "Snake", who is an Ogre Berserker that worships Cazic Thule.

The NPCs using faction ID 368 - Dervish Cutthroats enjoy a base value of -100 (in the faction_list table). Since they have no faction list modifiers (based on race/class/deity), everyone, including Snake, would start off conning "Apprehensive":

Assuming that there is a faction hit of -10 for killing a Dervish Cutthroat, and our intrepid adventurer, Snake, killed a derv: Snake's faction value would be -10, to which we would add the base value of -100, and Snake would consider "Dubious" to Dervish Cutthroats.

The NPCs using faction ID 361 - Ashen Order have a base value of 0, but they DO have a modifier based on both race and class (but none on deity): 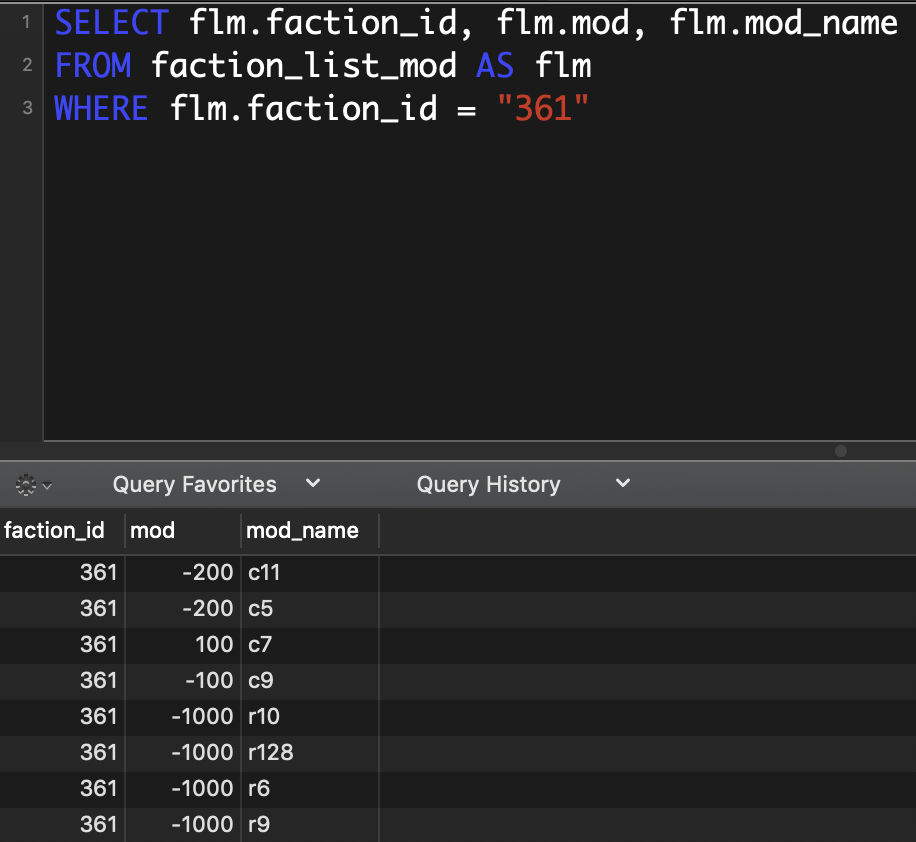 Recall that Snake is an Ogre Berserker. The Berserker class suffers no penalty in this case, but the Ogre race (ID 10) suffers a massive -1000 penalty. Therefore, before Snake has done any killing or questing (meaning, his faction value for Ashen Order would not exist), NPCs with this faction assigned would consider him "Scowls, Ready to Attack".

Assuming Snake took a faction hit of -10 for each NPC assigned to Ashen Order, he could kill 100 monks to reach the lowest possible Current Faction.

If instead, Snake turned over a new leaf and raised his faction with Ashen Order, the highest his Current Faction could reach would be 1000, and he would consider "Warmly" (he could never attain "Ally").

Faction values for each level are as follows. The number on the left is the TOTAL value as seen in the table above (+ or minus any effects like illusions, etc):