*** Manipulating entity lists is EXTREMELY powerful and if you were smart you would read this article.**

This article also assumes you have read other articles and have a relatively basic understanding of the quest/scripting engine.

To start off, an entity could be any of the following:

In this simple example below you can always assume that the client is the player who 'triggered' the script to occur, and the NPC who is bound to the script that has triggered:?

Some of you may already know this as common knowledge, but in order for this to cover everyone's knowledge levels I will preamble with the basics a bit.

Entity objects are used most commonly as a way encorporate the simple example above, I have one \(client** that **triggered** the script and a **\)npc that was triggered when I hailed the npc, but what they were really intended for is so you can flexibly 'select' any NPC in the zone when trying to perform any specific function.

We can essentially use a Controller NPC or any **NPC **for that matter to control any other NPC in the zone using entity objects, you just need to know how to select them and use them to your extreme advantage.

I am going to use Crushbone as a simple example here.

This zone by default has 119 NPC's approximately. Most if not all of them are Orc's and some prisoners and such.

Now, we can start getting to the real nuts and bolts of practical application here. Let's say I'm on a mission to liven up a custom version of my zone, and whenever Emperor Crush spawns, I want all of my Orc's in the zone to howl and beat their chest or swing their arm or do something provocative as well as make an emote we would use an example such as below.

As you can see they Orc's are all performing animation 8 which is a simple attack animation, for animtions see the Animation Reference List.

You also see orcs nearby you are saying 'Yargghh'' 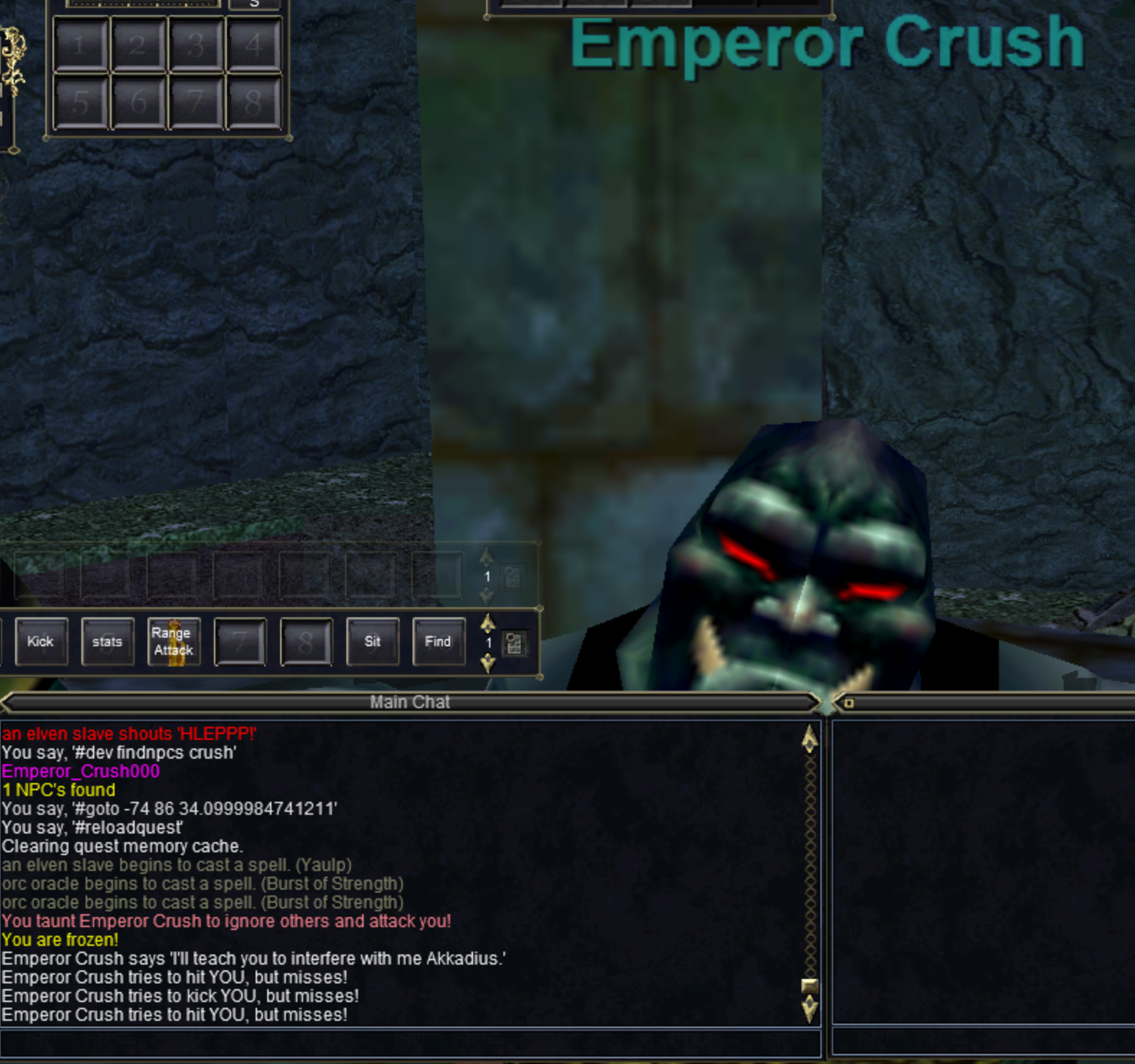 We've already used some selectors in previous examples, but to to give you an idea, below are some of the selectors that we can use to grab things and do stuff with them:

So let's say, I wanted to get something by any of these above? I use examples very similar to the one above, except for getting a single 'entity' does not require me to 'loop' through all the entries in a foreach or things of the like. If I wanted to for example just get ONE NPC, a very common method to do this is to use $entity_list->GetNPCByNPCTypeID(YourNPCIDGoesHere);