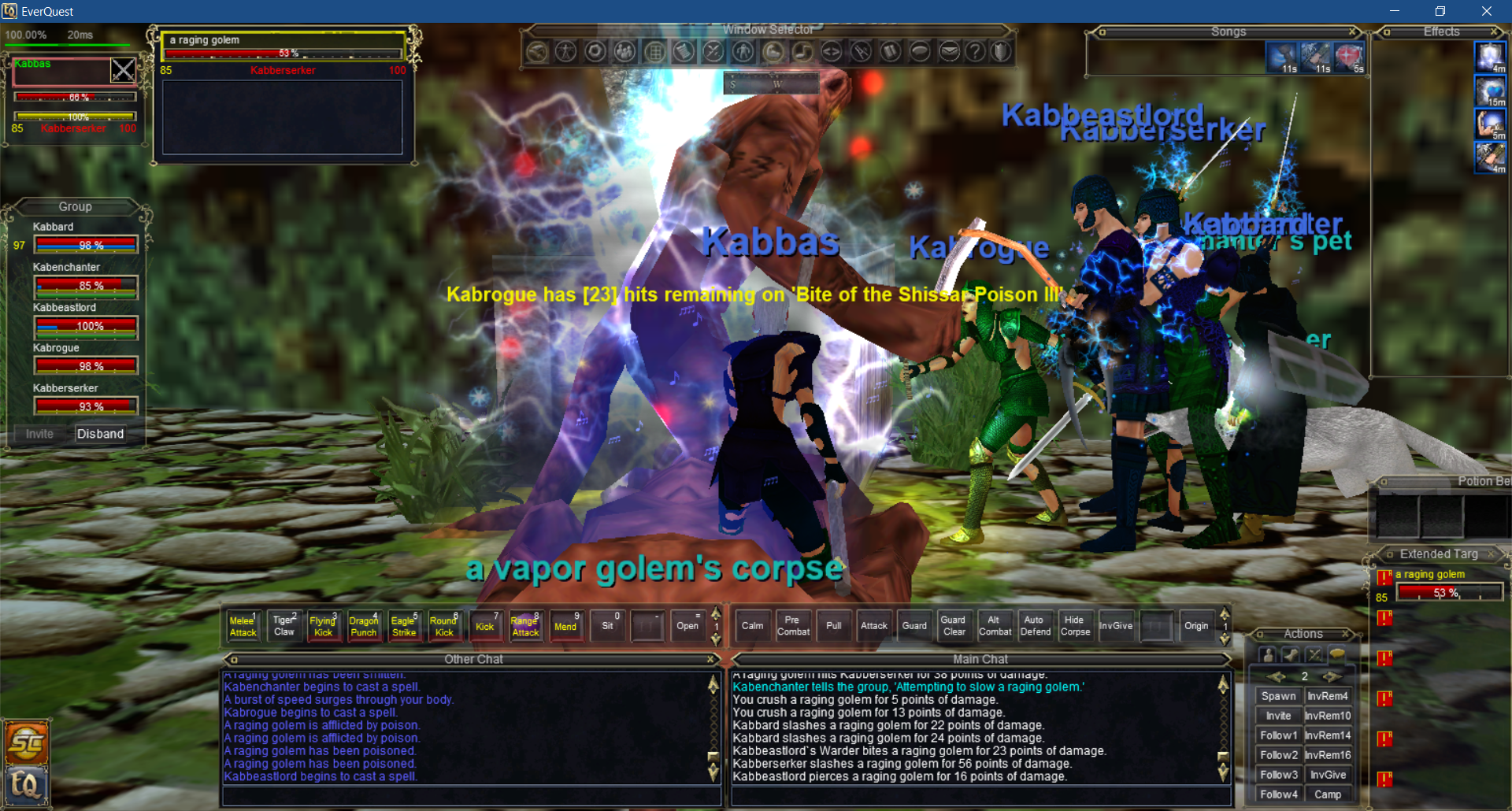 Note: Bot owner option deathmarquee messages have been changed to red in color.

In order to get potion effects to work properly after zoning or camping, I had to borrow code from the client connection handler.

It's unknown whether this code helps in the case of bots recasting buffs upon zoning and spawning..but, I did notice the lack of rebuffing in many cases - will watch!

Note: This change requires a quest update to capture the new global player files, or the changes may be added manually.

Fix for client positions upon entering or exiting a boat¶

There's a few weeks of solid work wrapped in this update, you can review the changes in this pull request if you wish

The main reason for these changes is that it simplifies the use of logging by developers, it also makes it far easier to create logging statements because we no longer need to look up printf codes to match variable types going into logging calls as our FMT library that we are using will detect the types at runtime

We have Detail level aliases, but we are trying to keep from using detail in categorized logging, if you are using detail you probably either need to use another specialized category. The only time detail should ever really be used is if it is incredibly spammy to the rest of the logging in the same category

RFC5424 Log Categories have been introduced, they are meant to simplify the use of common logging scenarios that don't require specific categories

When using any of these macros, logging output will append the process name before the message itself, thus deprecating process specific categories

Added code to restore rule notes to their original values

The approach I took resulted in minimal change to the code base. I did alter the code to enforce the new validated min/max from the client. This min/max applies to personally earned faction. So if a faction has a min of 0 and a max of 2000, that means your personally earned value can never go below 0 or over 2000. The actual con, will, however often do so because of class/race/deity modifications. I also changed the con ranges, per Mackal's data that was proven to be accurate

The above means that dubious is a much smaller range now. For that reason the scripts modify any custom faction base values to put them in the same range, hopefully as the creators of the custom factions intended.

Also to be noted as characters that have a faction between -501 and -700 wont be dubious anymore, they will be threateningly. This is expected with the new ranges, but might take players by surprise as the old ranges we used were more liberal but were incorrect.

The database is changed extensively, but really only content. We're translating faction_list to use the clients ids. As such every place a faction_is is used, namely (see below) are being converted

Quests will also automatically be adjusted. This MUST be done after the PR sql and before starting the server. This is automated by eqemu_server.pl (or starting world)

A great example of this is Ebon Mask and Hall of the Ebon Mask. Many PEQ DB style servers have both of these. Some have used one, some the other. We map Ebon Mask to the clients Ebon mask and the Hall of the Ebon Mask gets moved to the 5000 range, and all its references are preserved. However, if you would like to make proper use of client mobs to Ebon mask, or other factions that have duplicitous entries, I recommend you manually move to using the correct one. In that way all of the new raw data mapped in from the client into faction_list_mod will get used instead of what your db had before these values were known.

In my experience converting 4 different server's data, there are only about 20 factions moved into the 5000 range.

This PR has only 1 new, permanent table faction_base_data, which is taken right from the client. The base field is left in case you want to mod your server, but we are very sure that the client doesn't use a base. It uses global mods to race or class for this as you'll see in the new faction_list_mod

The PR makes many backup tables, and two mapping tables that are used during the conversion process to fix quests. This table was hand created by analysis. This table serves no purpose after conversion except an audit trail if we see any issues.

I will release a new PR that will clean up all these backups and temporary tables in about a month.

Merc and Bots Now Use the Same Stance Standard¶

Fix issue where NPC's clip into the world and the client interprets them at coordinates _**_0,0,0