The system is currently quest driven and provides quest APIs to create zone instances without the burden of manually tracking and validating lockout conflicts among characters. The system should have zero impact on servers that don't make use of it.

The pet window sit button was often out of sync. Also pet's were frequently still marked as sitting internal to the server due to the owner being attacked, or other issues.

A pet on guard will always return to guard after a battle. A pet sitting, will switch to follow mode after a battle. Pet HP sitting regen bonus will now only happen when the pet is actually ooc and sitting.

After hearing from @Trust that the taunt button was also out of sync often, I looked into that as well.

The client stores the status of an active pet's taunt setting. This is stored across sessions. The old approach was to try and force taunt on, on pet creation as well as logging on and zoning. Client messages, sometimes in response to out attempts, would end up toggling our taunt value away from what we just set it to.

Only client on/off clicks change state. Default is taunt on. Zoning and logging on both default to true.

The pet is created with taunting off. This matches the client.

On logging in with an existing pet:

The client sends a message if the pet was taunting when you logged off, which will turn it on, since pet creation now defaults to taunting=false in the constructor.

The pet's state is set from it's saved value in the database. The client is not involved, but will match as pet state is preserved by the client across zoning.

The pet's state is set from it's saved value in the database. The client is not involved, but will match as pet state is preserved by the client across zoning.

This topic in general deserves some discussion. In empty zones, mob processing typically does not take place, but quest timers do fire. Over the past year I have added multiple enhancements to this, and this is the latest of those enhancements.

Calling the quest::processmobswhilezoneempty(1/0) or lua counterpart eq.process_mobs_while_zone_empty(true**/**false) from a quest file enables or disables normal processing of mobs (movement, aggro, etc) in a zone, even when that zone is empty. Without these calls, a quest that say, happens once an hour and involves mobs spawning, moving and attacking (each other) would operate correctly in an empty zone.

In the past few months I added these other enhancements along the same line:

A rule that allows mob processing to continue for a set # of seconds after the zone goes empty. This allows mobs that chased someone to a zone line for example, to move back rather than just standing at the zone line.

Allowing grid types 4 and 6 to always process, even when zone is empty.

This change allows mobs like Fippy that spawn and run a fixed grid and despawn to complete their run on time, rather than always running the second someone enters a zone that was empty. This could be used for boats on servers, if they are placed on one of these types of grids.

This is the current logic that dictates mob processing. So mob processing occurs if the flag process_mobs_while_empty is set (this is the new quest api I just added), there are clients in the zone, the mob is on a grid that despawns at the end, or the zone is settling after all clients have left (my rule I added above).

Because the zone points that are sent to the client use an internal index lookup, it does not really give us power over determining or creating zone points in some cases. While this works in most of the data we've collected, there are scenarios where we'd like to create zone points entirely server side 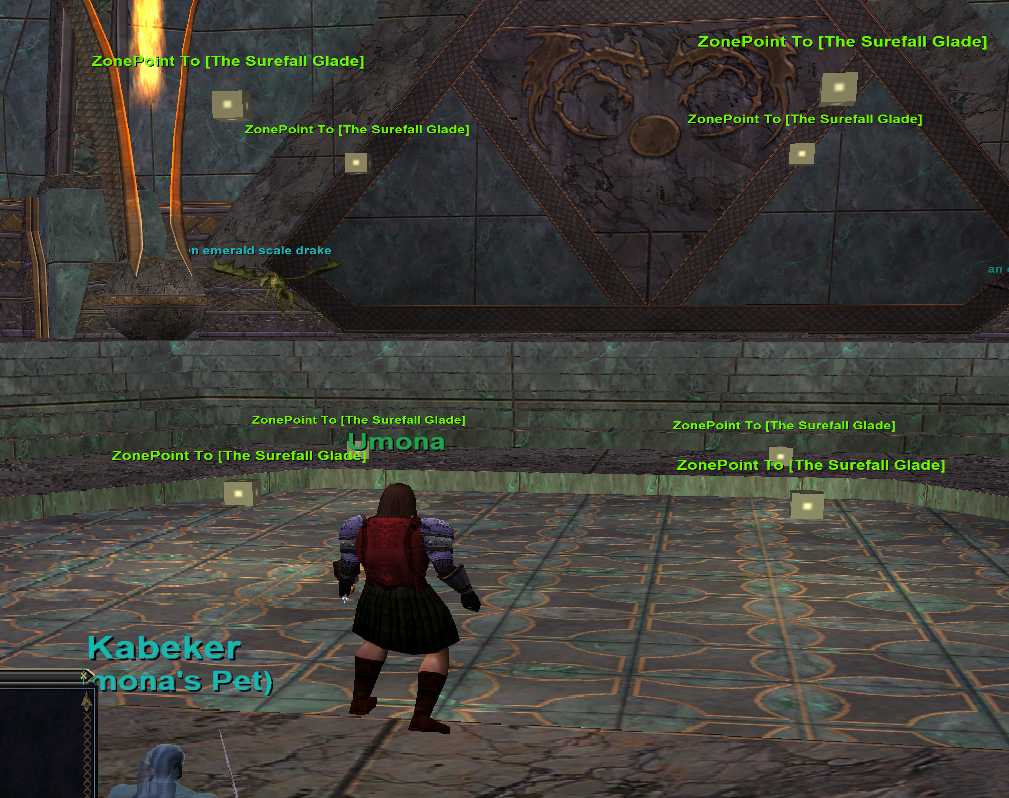 When a zone point is virtual it follows different rules, a box is created using the x, y, z with the width and the height into consideration

DevTools menu now displays whenever a GM enters a zone, it also has many more tools available

This PR / changelog covers many things; it would be preferred to not have a PR this large ever but considering the sweeping changes, it needed very careful testing, coordination and rollout

This is a result of the repository generator located at

Example Use (How do I use this?)

Starting at line 358 in the following Gist is an example CLI command that uses all of the above methods as examples; above line 358 is an example of what the a repository can look like

Updated #grid show command to use alphabetic names so names display properly (numerics were getting stripped) and stacked the names of nodes that are in the same #loc.

Added code to make sure that mobs that call for help, complete that activity before starting to move toward target. As written (previously) a mob could be out of earshot of his neighbors because movement started immediately. It was a race condition that nearly always resulted in mobs within the attacked mobs assist radius not hearing the call.

SQL to load correct mods into faction_list_mod for Drakkin and Guktan races as well as Agnostic deity mods. Only to be used on databases converted to using the client faction ids.SQL found in optional SQL area as: utils/sql/git/optional/drakkin_guktan_faction_data.sql

On PEQ we noticed via zone with high CPU footprint spending tons of time in in function Raid::GetRaidByClient where we excessively loop through all raids in zone, all members in the raid to return back a simple raid pointer. Now, we cache the pointer lookup instead of running the entire loop constantly. For perspective, with 100 toons in a zone all in a raid, you will easily see 4k/s calls to this function which adds up on a CPU profile (nuts)

We also noticed UCS sucking up a lot of CPU with 1,500 players online

Instead of purging immediately expired instances every 7.5 minutes, we will purge expired instances from the database table after they've been completely expired for an entire day every 7.5 minutes. The reason for this is that the code will still determine that an instance is expired when it needs to; but in order to not re-use the same instance ID not long after it had been freed while a zone is still online with the same instance ID, we're simply going to wait a grace period of 1 day to purge those entries as it will not harm anything

Client::SendToGuildHall() will send a client to a Guild Hall instance for 90 days based on a configurable rule. This will send the player to a Guild Hall instance regardless of whether they are in a Guild or not and it is up to the discretion of the server operator to check for guild id before making the call. If you are not guilded, you share an instance with other non-guilded players

By default, all classes process class attacks based on active timers. This involves checking attackability of target with every call - which is VERY expensive when done every server processing cycle since the timer is always 'ready.'

I added code to disable 'class' timers in classes that don't use them or are inactive because they don't have a skill. Class-based timers will not reactivate..but, skill-based ones will once a CalcBotStats call is made during the 'leveling' process. (If the skill is not available after leveling, the timer will disable itself again.)

Please report any issues on our forums or in Discord - Thanks!

Guild consent is persistent. The character_corpses table has a new guild_consent_idcolumn which is updated when a player issues a guild consent command. This means guild consented corpses may be dragged by guild members after a corpse is loaded (summoning the corpse to another zone or loading the corpse in a previously unloaded zone)

Group and raid consent are not persistent. Corpses will lose these consents when a corpse is summoned or if the corpse is loaded by a zone after consent was issued.

The handlers for EVENT_COMMAND and EVENT_BOT_COMMAND have been updated to allow a 'no change' behavior.

Script files using these event types will perform as before without the need to move the command scripting into them .. so long as there is no defined function for them.

Once a definition is given, the old method of using EVENT_SAY to handle them will no longer work and the new formatting must be applied.

If you have any questions, please direct them to our forums or the #support-quest-scripts channel in discord.

Unless new system rule Character:SoftDeletes (default: true) is disabled, characters will now no longer hard delete from all respective character tables and will only be marked as deleted via the newly created deleted_at column that can be found in the character_data table. This can make it far easier to recover accidentally deleted characters 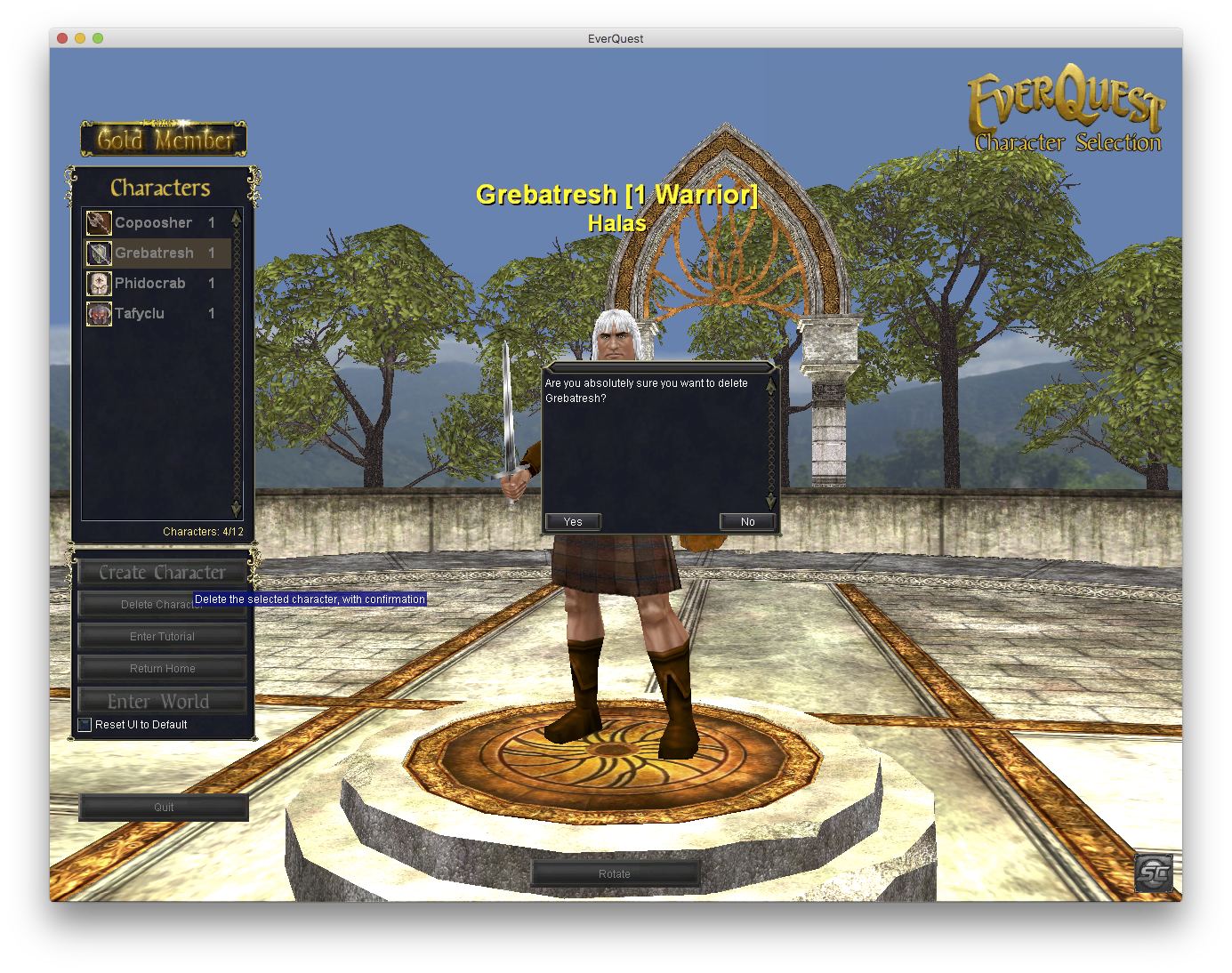