This is a suite of tools for manipulation of WLD files created by Zaela with some (plagiarized} instructions describing their use.

Texture Adder is a tool for adding new texture set data, allowing you to add custom mob model textures under new IDs rather than overwriting old ones. 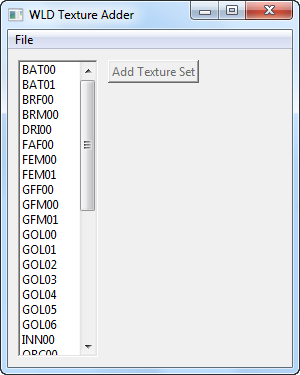 Note that the texture set data in the .wld file is different from the texture files that go into the .s3d. Other than the visibility/transparency settings (and some unknowns, see below), they basically just tell the client "a texture with this name exists, and you should try to load it for this model and ID". 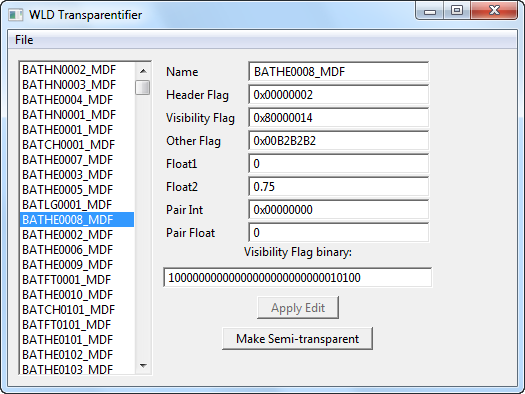 The names should line up with the names of .bmp files in the .s3d. Most of the data fields on the right have unknown functions (and are presented just in case anyone might want to try to figure someting out by looking for patterns), but the one we're interested in is the "Visibility Flag". Typical textures have values like 0x80000013 or 0x80000014. The "Visibility Flag binary" field represents the same value, but in binary (obviously). This field can be edited; each of the ones and zeros potentially corresponds to one setting being turned on or off for that texture. Which bits do what has not been thoroughly tested, but the user is free to experiment. On the other hand, if you just want to make something semi-transparent, a button is provided to do just that. Note that the button is not very smart -- it justs pastes 0x80000017 over the current value rather than setting specific bits (I'm too lazy to puzzle out exactly which bits are needed just yet). This should work fine for textures that have values of 0x80000013 or 0x80000014 beforehand, but may cause crashes on others.

The Weapon Copier is a tool for copying (old) weapon models and textures under new IDs of your choosing, to allow alternate skins etc.

The instructions for Weapon Copier are pretty much the same as for Texture Adder, the main difference being that you get to input the new ID number you want your copy to have. (It's up to you to make sure you use a free ID.) Also, because the names of textures items use are not necessarily as consistent as for mob models, when you make a copy a .txt file will be made detailing the source texture files and the new names they will be expected under. For example:

The Particle Editor is an editor for particle data for .s3d-based weapon particles. Most fields are unknowns, but I managed to find the ones for particle lifetime, delay between emissions, and how many of the same particle can be alive at once. Which is enough to make old weapons pump out absurd amounts of particles. With some trial and error and observation of a certain flag one can also change whether the particles stick around a weapon as it swings (animating strictly in weapon-space) or trailing behind it as it moves (animating in world-space around the point at which they were emitted).